Menu
Log in
Our main communication is through Schoop - Please download the Schoop app and use the school code 2704 to get the latest updates to you phone.

We run a range of after school clubs in Albany. Some of these are shown below.

Cricket club at Albany is a very popular club that runs during the Summer term for years 5 and 6. We play in tournaments each year in the Swalec Stadium against other schools from Cardiff and have reached the quarter finals in the last few years.

At Albany we have also been very fortunate to develop a link with Glamorgan Cricket club.  This has provided the children with the opportunity to attend a number of cricket matches at the Swalec stadium. We were very fortunate to be invited to be part of the ICC Champions trophy opening ceremony along with 'Only Men Aloud'. 80 pupils from Albany carried the flags of the participating nations onto the pitch in a ceremony that was broadcast worldwide. Later in the tournament members of the cricket club were team mascots for the Semi Final between India and Sri Lanka. This was an excellent opportunity and gave our pupils the opportunity to meet some of the worlds best cricketers. The photographs below show the flags being carried by Albany pupils and the front page of 'India Today' website with our pupils leading the Indian cricket team out. We would like to thank Glamorgan Cricket club for giving us these opportunities.

Music Club meets most Monday lunchtimes and is open to any pupil in Year 5 or 6 who enjoys singing.

Another year, another Music Club. The children are learning a new set of songs and are looking forward to performing them.

On Friday 18th October we shall be singing at the Senedd in Cardiff Bay for the International Fair Trade Towns Conference. 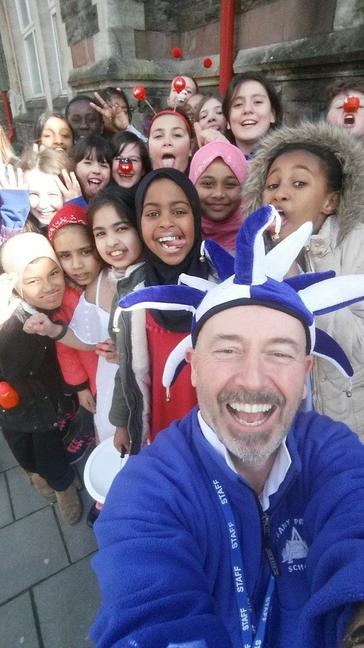